The machines I (RE)played on, during my Winter Vacation!

If you've read Drop Target #1, you know that Jon and I live in a tiny town in Vermont.  For Christmas I went home to Seattle, which means that I had to stop over in an in-between city, to catch my flight.  For various reasons, I chose to fly out of New York City.  And while there, you know what I did!

My first stop was at Reciprocal Skate Shop on the Lower East Side (402 E. 11th St. - by the corner of 1st Ave).  Jon discovered this place over Thanksgiving break and it was everything he said it would be.  The proprietor, John, is a super pinball fanatic, and he's got four machines crammed into his tiny storefront (when I was there it was The Getaway, Creature From the Black Lagoon, World Cup Soccer and Dr. Who).  He said he had another 15 or so machines in his apartment and in another space and he often swaps them out.  He was super friendly and loved talking pinball.  This shop is just a short walk from the 1st Ave stop on the L train, or from Union Square.  Swing by next time you are in New York!

That night, me and my buddy Gabe wandered around Brooklyn playing pinball.  Our first stop was Enid's, but alas, their Addam's Family was out of order!  Next we hit Muggs which had the new Iron Man pinball machine, which was actually pretty fun.  After a few games Gabe and I both got replays, which I soon found out would be a THEME for me on this trip...  That night we ended up at the Satellite Lounge, which is easily the best pinball bar in Brooklyn, with 6 or 7 machines.  I staggered in drunk and instantly had the best game of Monster Bash I've ever had, easily passing the replay score.  At that point, I decided to start taking photos of every machine I got a replay on:

As you can see here, I also got a replay on Stern's 2008 Indiana Jones machine.  I must say, I had more fun playing Indy and Iron Man than I have ever had playing other Stern machines.  I opened the Ark of the Covenant at one point, which dumped FOUR balls onto the playfield, which was intense!  I only regret that I left the bar without playing their Sega Starship Troopers.
The next morning I flew home to Seattle, where I had a very relaxing Christmas with my entire family.  The day AFTER Christmas, I headed to the pinball mecca, Portland, Oregon for a super quick trip (less than 24 hours!)  After a lengthy meeting, my pal Greg and I went to Ground Kontrol, which was in a new temporary location across the street while they were remodeling their main space.  They didn't have quite as many games, but still more than was possible to play in the two hours we spent in there!  Here are the ones I got replays on: 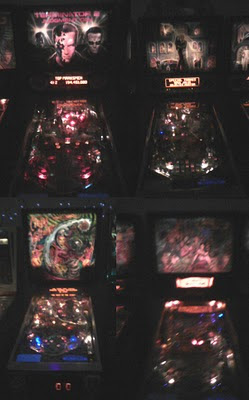 T2 was no big deal, as I live above a pizza place that has that machine, so I know all the shots.  It was my first replay on Addam's Family though.  I played a TON of new machines, but the two I spent the most time on were Cirqus Voltaire, which was SUUUUUPER crazy and fun, and Tales of the Arabian Nights which I became totally obsessed with.   Both of those games have some really innovative playfield parts and awesome ramp shots.  Every machine I played at Ground Kontrol was in perfect condition.  Their dedicated repair person was working on machines as I was playing and I thanked him for keeping the machines in such great order.  Hands down, this is the best place to play pinball in Portland, if not the entire West Coast.
That night I ended up at Slabtown with Gabe (back in Portland for Christmas with HIS family) and Grizzo.  Sadly, the change machine was broken, and at about midnight the bartender said he couldn't give us any more quarters.  It was Sunday night, the day after Christmas, so Grizzo had little luck getting a roll of quarters from a few other neighboring businesses.  Also, about half the machines were either broken or so filthy they were not really fun to play.  It was sort of a bummer ending to my Portland Pinball Playing, but I was not done yet for this trip to the Pacific Northwest!
Nope, on my last day in Seattle I swung by Shorty's for a few last hours of Pinball.  They had the newest pinball machine, Avatar, which I did NOT enjoy playing (too many toys, not enough ramps, weird elongated flippers).  I played a lot more Arabian Nights, some 1993 Indiana Jones, and then Monster Bash, where I had my best game of the entire trip.  I collected all six monsters and their instruments, thus starting the Monster Bash, where every shot was worth 2 Million.  I ended up with 122 Million, which was a #3 High Score.  Putting up a score in a real pinball bar like Shorty's felt like quite an accomplishment! 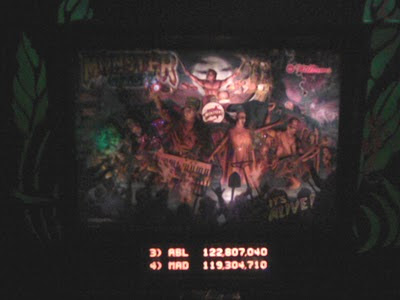 Sorry if this reads like me bragging about my scores, it's just really satisfying to see myself getting better and better at pinball.  Each time I go out and play "in the wild" I can see a marked difference from the last time I played.  At first I couldn't get a replay at all, and then a few months later I could get a replay on games I had played a lot.  And now, I feel like I can get a replay on almost any machine if I play it half a dozen times.  I know I still have so much more to learn, so all I can do is keep practicing!
I've added some of these bars to our "Pinhalls" side menu, so check them out if you are in the areas I mentioned.  And like Jon said in his last post, Happy New Year!  Let's make 2011 a year filled with all kinds of pinball fun.
Posted by Alec Longstreth at 4:02 PM 2 comments: 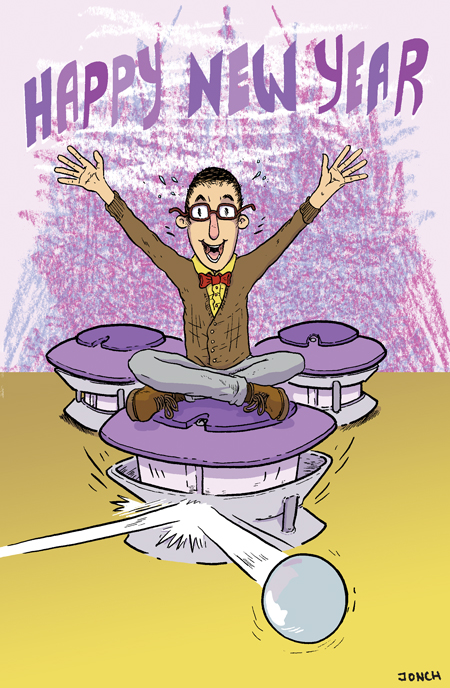 HAPPY NEW YEAR EVERYBODY!!  Does everybody have a good New Year Resolution?  Does it involve PINBALL?!  I used to think that New Year Resolutions were a joke and a half, but a couple of years ago I made one and totally stuck to it.  It's doable.  My big pinball plan for 2011 is to finish shopping out my Jurassic Park machine and have it ready to trade / sell / show at the new pinball festival in Pennsylvania.  Also, Alec and I plan to have another issue of DTZ out sometime in the spring.  Keep your wrist-radios tuned to this channel, pinballers!
In somewhat related news, yours truely is going to be going to Las Vegas in a week and a half (!?!)  My girlfriend and I decided to go on a trip as a x-mas gift to each other and Las Vegas is:
a) Warmer than Vermont
b) A criminally cheep trip
Also, it's no secret that the Pinball Hall of Fame is located in Las Vegas!  Needless to say, I CAN'T WAIT.
I have some REALLY killer pinball illos I've done lines up for the next couple weeks!  Be forewarned, though, some of them are WEIRD.
Posted by Jon Chad at 1:42 AM No comments: 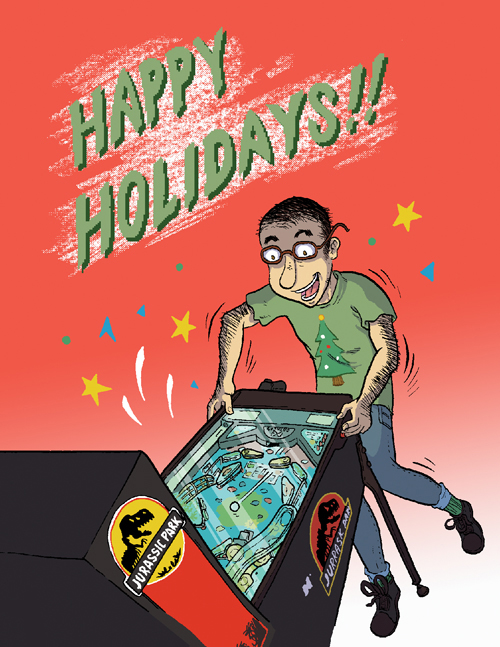 Happy Holidays everybody!  Anyone that flips the ole silverball with me can tell you that I LOVE THE HOLIDAYS.  I love the food, the music, the snow; EVERYTHING.  I'm actually not terribly keen on the actual day, but all the days leading up to Christmas are awesome.  Gentle readers, what is it that YOU want for the holidays?
I was visiting some friends in Burlington Vermont this weekend and two cool pinball things happened.  First, I need to preface this story with the fact that there are NO PINBALL MACHINES, AT ALL, in all of Chittenden county (a large chunk of VT that includes Burlington, Colchester, Winooski, Essex, and my hometown of Essex Junction).
1) This quote from a friend of mine who had visited me in WRJ and played the machines that Alec and I have (he isn't a pinhead, but he might be now!)
"Guys, Jon and his friend have two pinball machines that they maintain, and I've played them, and it's the best thing ever.  They're LITERALLY living our childhood dream.  Remember the old Aladdin's Castle arcade in the U-Mall?  Remember how we used to run out of quarters?  Well, remember how much fun that place was, but then imagine NEVER RUNNING OUT OF QUARTERS."
It was just one of those awesome, I-love-pinball, kind of moments.
2) A friend of mine that works in the Essex Outlet Cinema told me that he urged his boss into getting a pinball machine for the lobby!!!  Apparently, it's a Sega South Park, which I've played before.  It's a pretty fun machine!  I can't wait to give it a whirl.  It's a pinball oasis in an otherwise pin-barren sea.
Well, that's all I've got for you true believers over here at Jon Chad HQ.  Stay warm and have a great week!
Posted by Jon Chad at 10:07 AM No comments: 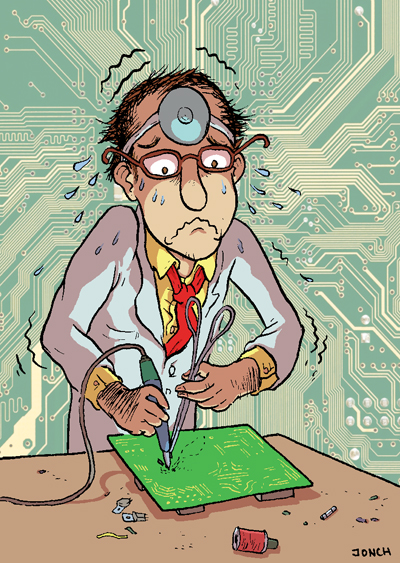 Just another image from what was going on in my mind's eye when I was fixing my Jurassic Park's circuit board.  It was probably the most stressful thing I've ever done.  The relief / satisfaction that coursed through my youthful veins when I turned on the machine and realized I hadn't f***ed up th machine was beyond articulation.
Hey!  Hey!  Did you guys hear that the Allentown show was shut down?!  I was super bummed because Alec and I were so gun-ho on attending.  Almost IMMEDIATELY, though, someone else bravely picked up the reins and decided that the show must go on!  So, I think the show is now called PinFestival.  It's going to be held around the same time in May that Allentown was held and in pretty much the same area.  I think it's safe to say that the Pinheads here at Drop Target HQ are pretty pumped about going!
Since I didn't put up an image last week, here's another one: 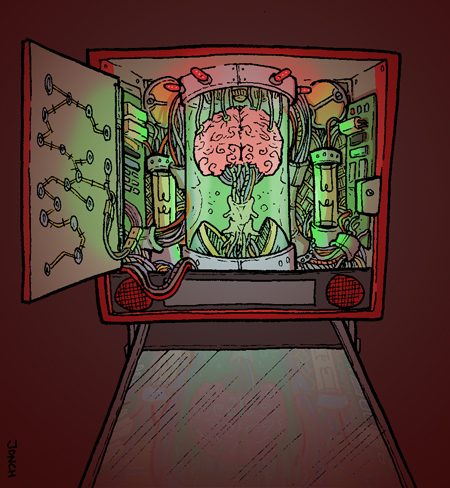 Alec and I joke ALL THE TIME about how the backbox of the machine is the "brain".  This probably contributed to my paralyzing fear of fiddling around with the circuit board.  I really liked how this one turned out.  Go play some pinball, y'all.
Posted by Jon Chad at 10:07 AM 1 comment:

Hey everyone, just a quick update to let you know that Microcosm Publishing is now carrying Drop Target #1!  So now you can either order Drop Target #1 directly from us, or lump it in with a BUNCH of awesome zines and minicomics from Microcosm.

We are slowly but surely getting our plans together for Drop Target #2, which we are still hoping will be out this spring.  There's a lot more on the way, so we'll keep you posted!
Posted by Alec Longstreth at 12:11 PM No comments:

THIS IS THE COOLEST

My dad is a patent and copyright lawyer, so I've always had a real fascination with inventions.  He turned me onto the quick-and-dirty patent confirmation tool known as Google Patent.  It's pretty self-explanatory.  I was thinking that there must be some pretty rad PINBALL inventions documented there, and then I found THIS:

!!?!?!?!??  Designed by George Gomez?!  Connect multiple pinball machine together for cooperative gameplay!?!  Why have I NEVER heard of this!?!  Can you even imagine how amazingly cool that would be!?  Discuss!!
Posted by Jon Chad at 9:36 AM 3 comments: