Citizens of Montréal!  Please note that Jon Chad will be at your 10th annual small press, minicomic and zine fair, expozine this weekend (11/26 - 11/27)!  He will have copies of all three issues of Drop Target, so if you are in the area, swing on by and pick one up.  He'll also have tons of his own cool comics for sale.  We'll have to see if he returns with any pinball stories from Montréal... last time I was up there, I couldn't find ANYTHING!
Posted by Alec Longstreth at 10:17 PM 1 comment:

Pinball Violence in Movies No. 2

Sigh...  Violence is never the only answer, you guys!  Especially when pinball is concerned!  Unfortunately, we arrived at another piece of American cinema that uses a pinball machine as a punching bag.  I present, the end of Superman II: 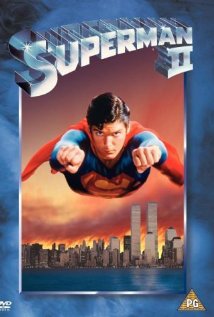 I won't go to much into this one, since many of you have seen Superman II, but at the end of the movie, Clark Kent returns to a diner after he gets his powers back.  Earlier, at the same diner, he was hassled by this guy named Rocky(?).

Well, with his powers back, what's the first thing on Superman's mind: REVENGE!!!!  He lays down some well-calculated insults on Rocky, "I've never seen garbage eat garbage before!" and then swaggers up to him like a boss.  Rocky takes a swing at Supes (like a Grade A Chump) and breaks his hand.  Superman lands his sorry butt in a plate of food and then throws him across the diner into a Buckaroo (?) machine!

Pinball is one of the most American things I can think of, so I thought Superman would put more of an effort out there to safeguard it!  Oh well!

Hey Everyone (and welcome anybody that is here by way of Stern),

The good people at Stern Pinball have kindly asked us to share some of our pinball love on their website!  As you know, we are ALL ABOUT getting pumped about pinball, and we really appreciate the chance to share that enthusiasm with a wider audience.  We're going to be cross-posting some stuff from this blog and issue 1, as well as brand new content and finds!  As of now, we're shooting to post something there once a week!  Don't worry, loyal DTZ goers, we'll still be posting here a bunch too!  Alec and I have been really busy with teaching and book projects, but we're planning on really digging in our talons to this stuff over the winter!

You can read our first post at Stern HERE.
Posted by Jon Chad at 1:30 PM 2 comments: