Last week, while playing a game of Medieval Madness, the sound suddenly shut off while gameplay continued.  Then the initial "BONG!" sound effect from when you turn on the machine went off and then the sound and music came back on VERY LOUD (the default setting of 4 or 5? I have it set to 1 since it's in my kitchen).

The loud sound continued through the rest of the ball, but after tho bonus was tallied and ball two was placed into the shooter lane, the sound reset to its normal levels (??!).  On ball two the same thing happened, only this time there was no music when it was really loud, only sound effects.

I've done a few more tests and it seems like this happens when I start a part of the game with new music (Royal Madness, Castle Multiball, etc.)  On my latest test, I pushed through to ball 3 and the whole machine reset itself (GULP!)

I opened up the backbox and checked out the A/V board (if you can't tell - I don't know anything about this stuff) nothing looked visibly burned, all the fuses were OK, the LED was blinking the way its supposed to (according to the manual) so I'm not sure what's going on.

If anyone has any suggestions on what to check or anything to try, I would greatly appreciate it, thanks!

Posted by Alec Longstreth at 9:00 AM No comments:

For my birthday, my parents bought me an upgraded Williams/Bally Ball Trough Assembly.  It was a great present, because at $125 it was hard for me to justify buying it for myself.  Thanks Mom and Dad!  Here I am holding the new trough up in front of the old one which will be replaced. 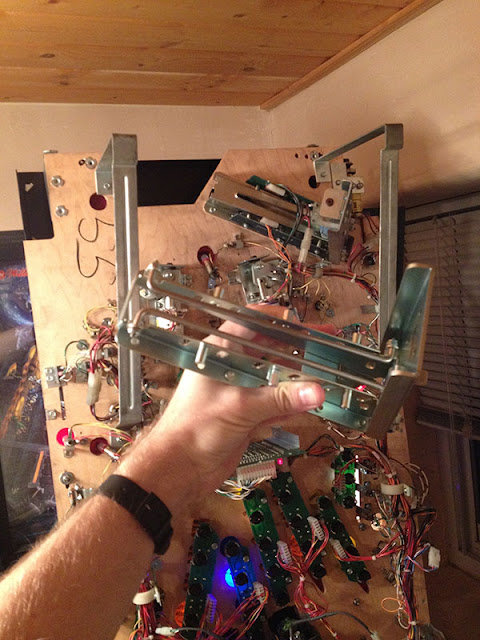 The problem with the old assembly is that the track where the balls sit develops little divots over time (like, say... 18 years!).  This has happened on mine to the point where the balls will get locked into the divots and won't slide down to be ejected up into the shooter lane.  You'll start a multiball and... no balls!  To fix this you have to uninstall the entire assembly and then take a metal file and grind down the divots.  I have had to do this twice now.  It's not the end of the world, but it's a pretty involved project. 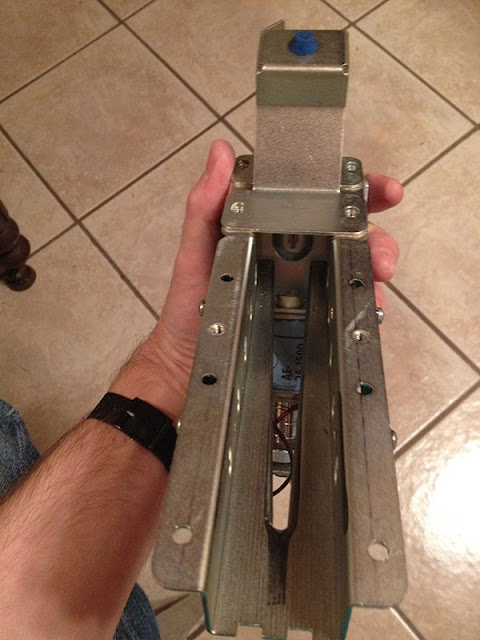 The upgraded assembly uses removable rails as the track for the balls.  These can be unscrewed, rotated, flipped and replaced, ensuring that this part will last for the lifetime of the machine!  You can access the rails with the playfield up, so I shouldn't ever have to take this thing off the machine ever again.  It's also got a latch built into it that prevents the balls from entering the shooter lane, so that you can raise the playfield without having to run the "eject balls" test.  I was very excited about this time-saving feature! 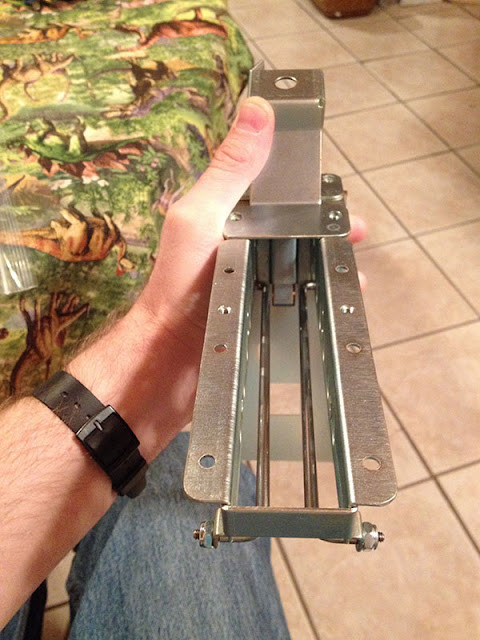 First I took out the old assembly, which you can see here on the left, with its optical boards and solenoid still in place.  All I gotta do is transfer those components onto the "blank" new assembly.  Should be easy, right?

As it turns out, no... it's was not very easy.  The first obstacle I hit was that the mounting holes for the circuit board did not line up with the holes on the assembly.  I figured this was because this one part is supposed to work for about 20 different machines.  I moved the rubber washer and metal sleeve on the circuit board to another hole that was below the original one and that lined up better.  However, there is a little double-sided nut that moves to one of two pegs to accept the bolt from the circuit board, but because of the peg, the bolt only goes in about half way.  I dug through my toolbox for a shorter bolt with the same thread coun, but no luck.  I ended up using two nuts as giant washers to get a good grip with the original bolt.  If you look carefully below you can see it sticking up in the middle of the board:


Next I brought this assembly back over to the machine to install it, only to find that the holes in the playfield did not line up with the holes in the top of the assembly!  I could only get 4 of the 6 bolts in.  I'm sure it's still enough to keep it on there - but come on!  It was off by about 1/8" on the last two holes - not even close.  I would think this would be the first thing the designers would make sure is consistent on this redesigned part.

Next I thought I'd try out the latch function for the first time.  I slid it up and let go.  It instantly fell back down.  It is very loose (maybe because I had to torque the assembly to try and get 4 of the 6 bolts to fit in the misaligned holes?)  Anyway, this was a real disappointment.  If I keep my hand on it while the playfield is going up, eventually it crosses a point where it will stay down on the other side.  I guess I could also tape it before I flip it up?  Ugh.

I'd give this part a B-  It works fine now that it's in place (except for the latch) and I look forward to not having to uninstall it if/when the trough develops more divots (assuming those four bolts hold!) but it was disappointing that it didn't fit the machine better.  All my other experiences with redesigned parts have been much more positive - where they pop right into place.  Anyway, it's in there!  So we'll see how it performs...
Posted by Alec Longstreth at 3:37 PM No comments: