Oh man, Jon and I really, REALLY wanted to go to Pinball Expo this year, but with our teaching schedules it just wasn't in the cards this year...  The expo event that we were the most excited about checking out was the Stern Pinball factory tour.  Luckily, Darian Glover did go on the tour, and whipped up this excellent video of the trip.  It looks like it was a lot of fun...  Maybe we'll be able to go next year!

Posted by Alec Longstreth at 2:14 PM No comments:

If you have been enjoying the Harry Potter Pinball dream machine playfields I have been drawing for Drop Target, then man-oh-man do I have the T-shirt for you! 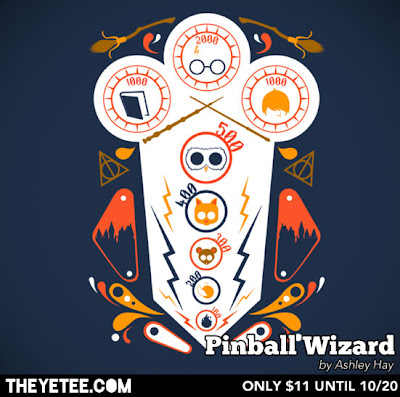 This awesome Harry Potter Pinball Wizard T-shirt was designed by Ashley Hay and is available for a measly $11 on TheYetee.com   It's only available until 10/20 (about 40 more hours!) so if you want to score one for yourself, you'd better apparate over to there right away!

Thanks to Drop Target reader Don for letting me know about the shirt.  I ordered one and it will be my official pinball shirt from now on!
Posted by Alec Longstreth at 9:58 AM 4 comments:

The "Dream Machine" in Drop Target #3 was created by our Belgian pinball friend Max de Radiguès, who many of you no doubt recognize from our installments of "Zeros to Heroes."  After spending a year living (and playing pinball!) in White River Junction, Vermont, Max has returned to his homeland of Belgium, where he is still playing pinball!


Recently Max traveled to Carcassonne, France to visit his cartoonist friend Pierre Maurel.  While in town, Max and Pierre taught a series of comics workshops at local schools.  As an added bonus, Pierre tracked down a local pinball enthusiast who agreed to show the guys his pinball collection.  Here is Max's description of their trip out to his house:


It's in a farm a little outside Carcassonne. The guy is from Luxembourg and owns something like 30 machines (he had more than 40 but sold a couple of them). They are from a lot of differents time periods... He also as a huge slot machine collection. He just like to fix them. He doesn't really like to play...

So they're all in his barn covered with blankets, dust and random stuff...  He buys most of them in Belgium and Luxembourg and sometimes Holland and he as a few machine on free play for his clients (he rents rooms for tourist...)  He's getting divorce and looses the house so god knows what will happen to that treasure...  Wish you could have been there !

Below are some photos from their visit - what a collection!  Hopefully they'll end up in good hands. 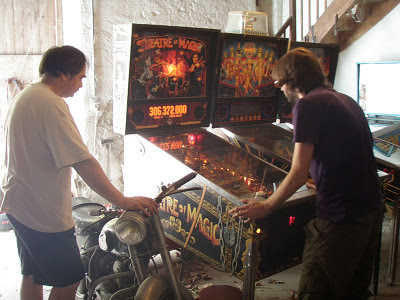 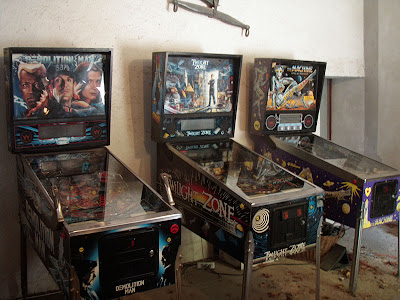 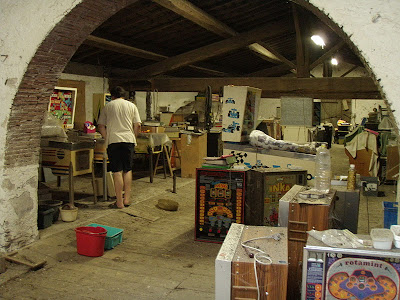 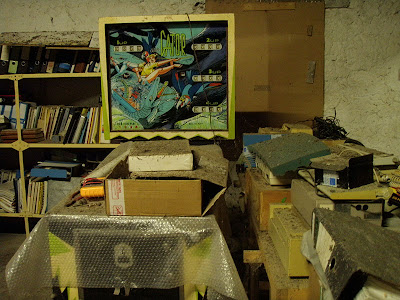 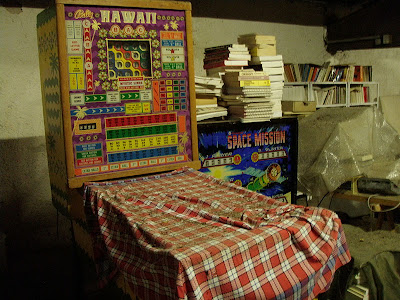 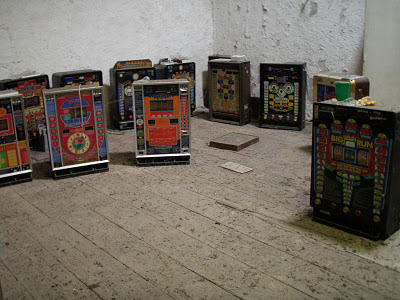 Sorry it has been quiet around here lately.  We have been spending most of our recent "Drop Target Time" sending out orders to all of our readers! Jon and I have a lot of cool stuff in the pipeline though, and we'll be sharing some of it with you all soon!  Until then, keep flipping!
Posted by Alec Longstreth at 6:33 PM No comments: