Hello Pinballers!  The holidays are in full swing here at Drop Target HQ, and I thought that I would give you guys the greatest gift I could give: embarrassing photos of me!

So, for the past couple of Halloweens I've been obsessed with really simple, iconic costumes.  I think I must have watched some sort of Halloween retrospective or something, but all I remember is seeing people dressed as skeletons, ghosts, cowboys, etc.  Classic.  I decided this year I was going to be a spaceman.  My costume was coming together really well, but I wanted to screen-print something on the front to make it a little more retro/iconic.  So I put a simple Saturn on the front.

Later, I was discussing my costume idea with a friend and she said, "a space ranger, Jon?  Why not a PINBALL ranger?"  Oh.....my....Godzilla vs. Mothra....   TALK ABOUT A MISSED OPPORTUNITY!  Well, I screen-printed some pinball parts around the Saturn and tried to pass myself off as a cosmic pinball ranger.  Although, thinking about it now, I could have said that I was 3D Pinball Space Cadet from that pinball game that is included on nearly EVERY PC (I also think it's probably the most played playfield ever...ugh, now I'm sad!).  Here's me in my costume: 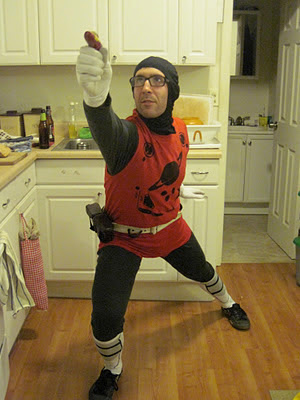 And here is a detail of the shirt: 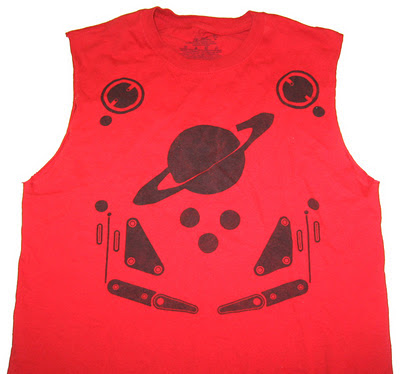 Needless to say, screen-printing pinball parts was really fun.  I've been dying to get together some sort of shirt design that Alec and I could sell here, or at shows.  Maybe something like this would be fun.
Anyway, happy holidays!!
Posted by Jon Chad at 10:44 AM No comments:

This week's unfortunate case of pinball violence comes from issue #40 of the 1997 run of Robin.  Besides a particularly angry Robin scouling at us from the cover, the titular character doesn't appear in this issue.  Instead, the scene flips back and forth between Tim Drake talking to his girlfriend, and his girlfriend's vigilante exploits.  At first it's par-for-the-course; the girl vigilante is chasing down and beating up the bad guys.  But then THIS sequence happens.  First, she chases the goons to their getaway vehicle: 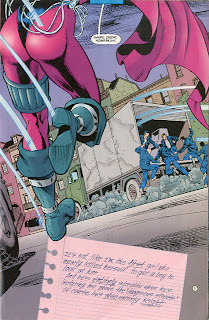 (click to enlarge)
So far this is pretty benign.  She jumps onto the back of the truck and starts laying in on this one poor bloke.  Heaving a mighty blow, he is hurled helplessly into a...pinball machine!?! 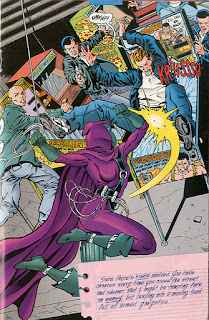 (click to enlarge)
Not just ANY pinball machine, mind you, but the rare "Gorfinator" pinball machine.  Look at those classic lines peppering the cabinet!  "I'll call you back"  "If he don't get you, his boiler suit will!" (?!?)  What in the world does that mean!?!  These goons must have been wrapped up pretty heavily in black market pinball trafficing.  They even have the uber-rare "Archie Enemy" pinball machine.  "He'll win good"   ahhhhhh, as if taken from the lips of the bard himself!  Anyway, even though the two twins (!?) with the pistols have a clear shot at our hero, they decide to hit her with the Gorfinator. 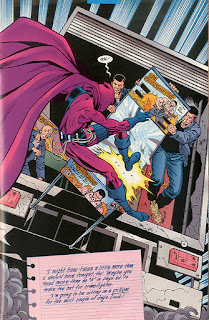 (click to enlarge)
I guess the twins reasoned that the Gorf was too damaged to part out.  Or maybe they were looking to toss it anyway since that cabinet is so gross. 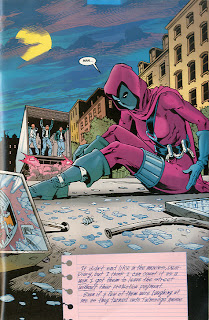 (click to enlarge)
Or maybe they couldn't part it out because the Gorf is made of the most bizarre assortment of parts compiled in one wretched cabinet.  I DARE you to try and figue out what's going on on the bottom of that playfield.  This merciful machine has no outlanes, but it also has a two inch thick backbox.  My two favorite things to note:

1) The pinball machines drawn in this sequence were clearly done without reference.  Someone thought to themselves, "er...uh...pinball?  it's a box with two buttons on the side? two flippers?  a rule card?"  It's the lowest common denominator.

2) The goons are LAUGHING at her as they peel off.  They look like they're having the time of their lives.  They must have wanted to get rid of the Gorfinator for a long time.  Now they can focus on getting that rollover on Archie Enemy.

I looked at all the pinball machines released in 1997, and have no idea what the catalyst was for the Gorf and Archie.  Until next time, keep you machines safe!  Also, check out Alec's post on the Stern Blog!
Posted by Jon Chad at 8:55 AM No comments:

I posted some images over at the Stern blog.  You can check out the post HERE.