The calm before the pinball storm...

So right now Jon is at San Diego Comic Con, hanging out with the Stern guys, playing Metallica and having a blast.

Well, instead of heading straight back to Vermont when the convention wraps up, he is going to take a slight detour to come visit me up here in Oakland!

We are going to be playing A LOT of pinball, so I will do my best to take some photos along the way! We will also, of course, put our heads together about Drop Target issue 6 to get the ball rolling.

More soon!
Posted by Alec Longstreth at 9:00 AM No comments:

I took a quick trip home to Seattle over the 4th of July weekend to see my family.  I was literally there for about 96 hours, so I didn't think I was going to have time for pinball on this trip.

One night after dinner though, my Dad was driving back to Capitol Hill to drop my sister back at her apartment when we went by this storefront window and my internal pinball alarm went CRAAAAZY: 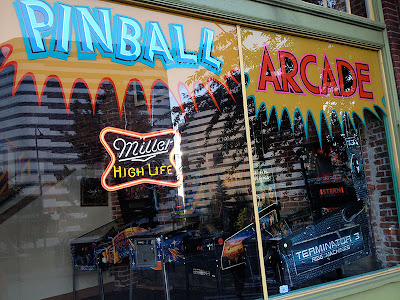 To my astonishment, my father then pulled over right in front of this place, which he had planned all along.  The place is called John John's and they had a pretty nice selection of machines, including Star Wars: Episode 1 (no, I didn't beat it). 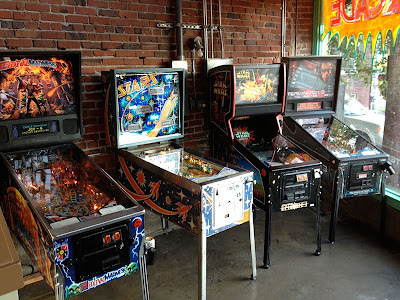 My sister and my mom were basically sitting around waiting for us, so my dad and I played a game of Medieval Madness (with a color DMD!) because he has some experience on that table.  I had a little trouble during multiball, getting three balls into the catapult, but the guy behind the counter took the glass off and fixed everything for me (without ending my multiball - props!) 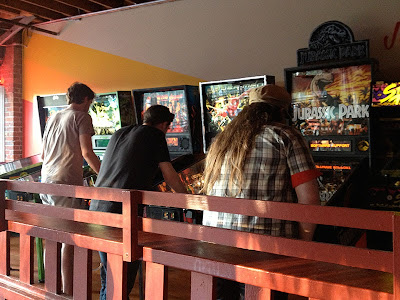 There was a balcony upstairs, so I dashed up there to get this photo (there was also a Harlem Globetrotters machine way back in the corner).  The Hulk version of the Avengers machine was priced at 50 cents, so I played a quick game and got a replay, but had to leave it for the next guy (everyone was waiting for me).

It was super cool of my Dad to look this place up for me.  Next time I'm in Seattle, I will definitely spend some more time in here!  If you live in the area, check it out. 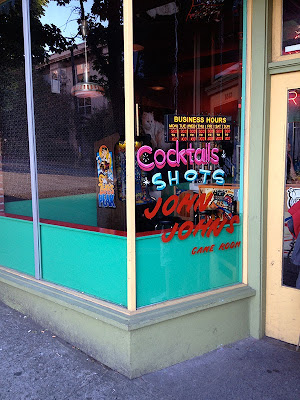 Posted by Alec Longstreth at 9:00 AM No comments:

I always have a big stack of minicomics and zines that I need to read.  Some arrive in the mail and others I pick up at various comics shows around the country.  Recently I was working my way through the stack when I came across Feedback #12 by John Isaacson. 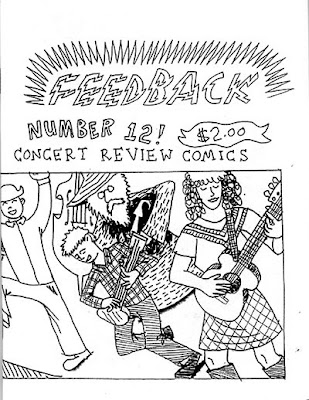 I've known John for a long time now through the zine scene and I have a bunch of different comics and zines by him.  Feedback is a great review zine.  Each spread is a review of a concert that John goes to - the left page is the flyer for the show and the right page is a page of comics.   In the back he also reviews records and zines, which is where I found John's review of Drop Target #3: 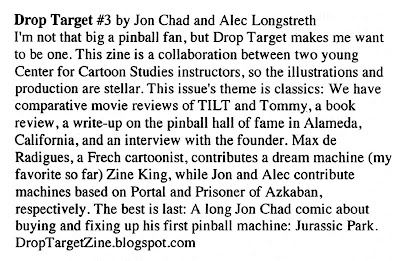 Even better, in one of his review comics he plays some pinball, inspired by reading our zine!  This is what we're all about!!! 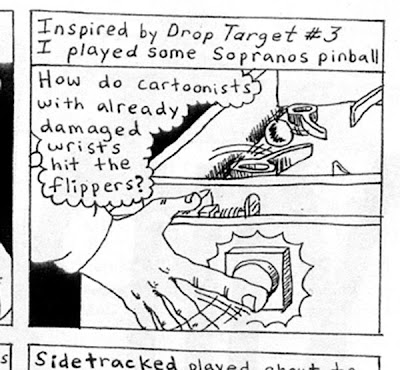 You can order a copy of Feedback #12 and all kinds of other cool stuff on John's site.
Posted by Alec Longstreth at 9:00 AM No comments: