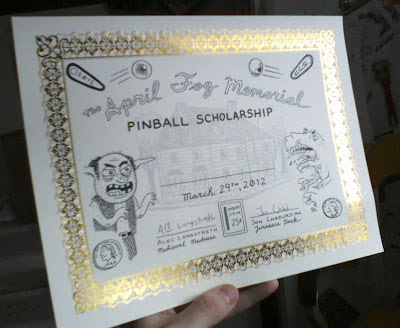 When Jon Chad and I put our pinball machines in the media room at the Center for Cartoon Studies, we set up a deal with CCS in which 50% of the proceeds would help us pay for our machines and 50% would be donated to the school in the form of The April Fog Memorial Pinball Scholarship (named for the house in which my Medieval Madness machine used to live).

Since last year's scholarship, there have been 1,289 games of Medieval Madness played, and 606 games of Jurassic Park (those stats DO NOT include games played by me or Jon). This adds up to $398.00, which is a lot of pinball!

Before spring break, the CCS seniors submitted design proposals for their thesis projects, including mock-ups of the finished packaging. During spring break, two alumni (Joe Lambert and Jen Vaughn) looked through the proposals and selected the best four, based on design and content. Each of the four students will receive 1/4 of the money as photocopies, to help with the printing of their thesis projects.
Last Thursday in class, Jon Chad announced the recipients of the scholarship, who are pictured here: 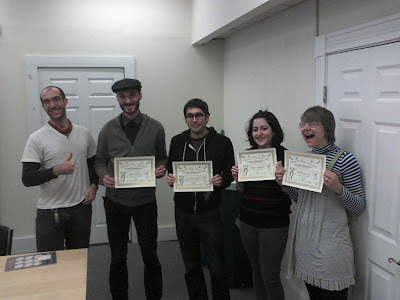 That's Jon on the far left, then from left to right it's: Andy Warner, Dakota McFadzean, Amelia Onorato and a very excited Melanie Gillman.

Congratulations to these seniors, and thanks to all the students, staff, alumni, fellows and faculty who dropped a quarter or two in the machine!
Posted by Alec Longstreth at 2:11 PM