The trains were messed up this morning, so Claire and I were a little late getting to the show today.  It was okay, things were a bit slower today, so I don't think we missed too much.

I didn't have any panels I wanted to catch today, so I brought some work with me and spent most of the day behind the table, selling zines while I drew some illustration stuff.

At one point, Claire saw that the Wizard of Oz line was really short, so she watched the table while I hopped in line.  While waiting for my turn, I heard some guys talking about the game.  Supposedly, this was just a prototype.  It wasn't fully playable (you only got 2 balls) and none of the lights or video effects were programed.  But the playfield was populated, and most of the shots worked. 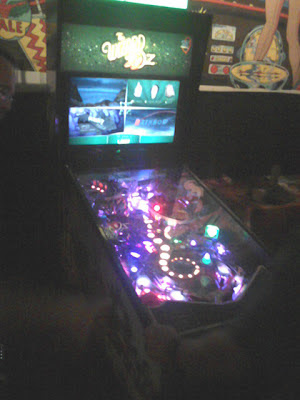 There was a lot going on, and I had a big line of people behind me, so I didn't exactly have the game of my life, but I did manage to get the ball up to both upper playfields, and I also saw some of the lighting effects.  It's such a clever idea to make every insert as a multi-color LED with clear insert plastic.  The designer can make each light whatever he or she wants for whatever mode you are in. 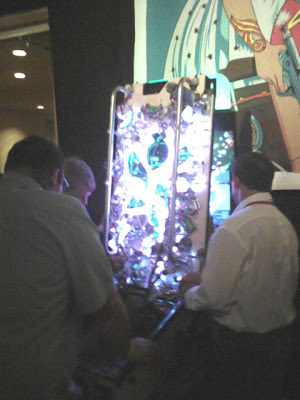 At one point the playfield was up too, which was very bright!  (Sorry it's such a crappy cell phone photo).  Anyway, Claire and I traded off watching the table so that I could play a bit more pinball before the expo was over.

At 5pm we went over to listen to the raffle drawing.  I didn't win a free pinball machine, which is either really sad, or a huge relief, depending on who you ask!  ;)

The show was a total blast, I got to meet so many cool people and I had a great time listening to the panels and playing pinball until my arms hurt.  Thanks especially to the guys at Marco Specialties for letting me sit in on their table space, and to everyone who swung by to check out the zine!

Tomorrow I'm heading back for one last volunteer shift to take everything apart.  What a week!
Posted by Alec Longstreth at 12:47 AM