Whew! It was another packed day of pinball fun at PPE6 today.  Claire and I started the day with a viewing of Pinball Donut Girl, a short film with some pinball in it.  For some reason (wishful thinking!) I somehow thought this was a full-length feature, when in reality it was only 10 minutes.  Still, a lot of hard work went into those ten minutes.

Afterwards, I headed back to the Marco Specialties booth, to find that the guys had added a Drop Target image to the slideshow! 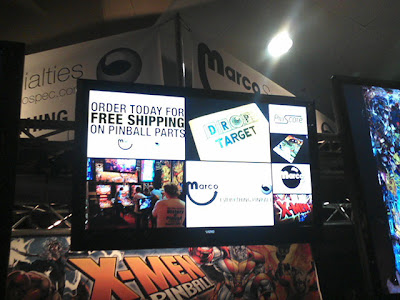 The line to play X-Men was already pretty long in the morning, but it got longer during the day as two of the four machines were bought right then and there.  Some lucky pinheads got those machines without having to pay the extensive shipping costs to get it to California, plus they can just go home and start playing right away! 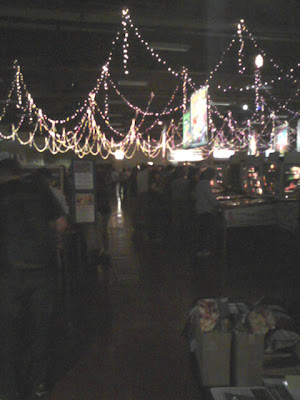 The show was very packed today, with tons of people, but I'll tell you the truth - we didn't sell many zines.  I think I came in to this show with COMICS convention expectations - people who are there to buy things, when really, at a PINBALL convention, people are just there to play pinball!  Luckily, I'm still having a blast talking to people, hitting as many of the panels as I can, and playing a little pinball of my own!  ;)

After lunch, I went to a few more panels, and on my way out, I saw these awesome "Where are you from?" maps.  On the left was the entire world, the middle had the USA, and the right-most one was the bay area.  It was a pretty impressive turn out! 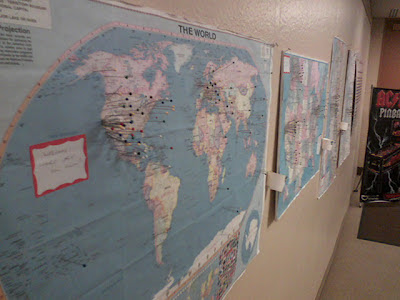 I got to see George Gomez speak, which was awesome, because he is one of my favorite pinball designers.  He teased us all by telling us that all the files for his next game were on the laptop he was using for his slideshow, but he couldn't show us any of it! 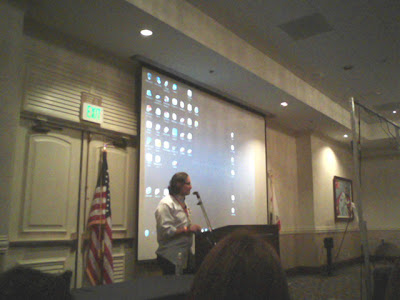 George walked through the entire process of pitching a pinball game to Stern and then the various sketches that are made to get the design process rolling.  We got to see some early concepts from Lord of the Rings and his Sopranos game, which was pretty cool.  Then the whole room all collectively designed a haunted mansion game.  It was pretty cool!  We all shot out ideas while George drew them out on a sketch pad.  I was proud that some of my suggestions made it into the sketch  :) 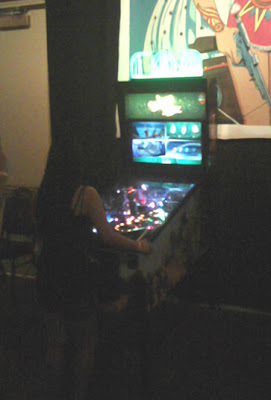 Later in the afternoon a Wizard of Oz machine appeared out of nowhere and instantly a huge group of people started lining up to play.  I didn't get to play, but I looked over people's shoulders.  It looks pretty crazy!  It seems like every single light on the playfield is a multi-color LED.  There were certain modes where all the lights would come on in just one color.  It was pretty dramatic.  I'm not totally sold on the giant flatscreen monitor in the backbox.  The default mode is a 4-way split (shown above) that has status updates on the different goals you are trying to achieve, then if you start a mode or something it will play a clip from the movie.  It just seems kind of overwhelming - like too much video while you are trying to play pinball.  But then again, I didn't get to play it, so what do I know!  Hopefully the line won't be too long tomorrow so I can get a crack at it.

I ended the day by going to a great Tim Arnold panel where he got DEEP into the numbers involved in starting/running a pinball museum.  He had some great advice for starting your own arcade and/or pinball club, and I took a lot of notes.

Tomorrow is the last day of the show, but I'm also heading back on Monday to help load out all of the machines.  I'm going to need a vacation from all this pinball when this weekend is over!
Posted by Alec Longstreth at 1:50 AM