As some of you know, I am a HUGE Don Rosa fan.  His comics were some of my favorites, when I was growing up.

Today on The Comics Reporter, Tom Spurgeon posted links to a series of four videos of Mr. Rosa giving a tour of his house and all the various collections that it houses.  I was very surprised when, about 6 minutes and 15 seconds into part two of the tour, when Mr. Rosa reveals that he collects old pinball machines!  We even get a look at his working Flash Gordon (Bally, 1980) pin: 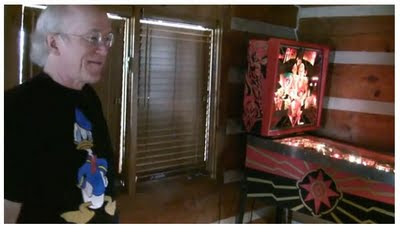 Then, in part 3, about 5 minutes in, he says that he's been trying to buy a Shadow (Midway, 1994) machine.  There's something about comics and pinball, I'm telling you!  We'll have to try and get some copies of Drop Target to Mr. Rosa, one of the greatest living cartoonists in the world.
Posted by Alec Longstreth at 5:57 PM