One of the coolest things to see out in the wild is a bank of pinball machines that are all in great working order.  That's a pretty big "duh", am I right, players?  What's even cooler, though, is when that group of machines (and it doesn't need to be a LOT of machines, mind you) are all THEMATICALLY related.  I recently had the good fortune to be in Portland, ME for the Maine Comics Arts Festival (MeCAF).  I had gotten a lead the week before from the owner of Casablanca Comics that he was thinking of bringing in  Hulk and Buck Rogers pinball machines into his shop.  By the time me and my posse rolled up, he hadn't, but very nicely pointed me in the direction of Coast City Comics.   Both shops were AMAZING comics shops, but Coast City delivered on the goods.  In the back were four machine, three of which turned on:

-Monster Bash
-Batman (Stern, the one not turned on...)
-Nightmare on Elm St.
-Elvira Scared Stiff 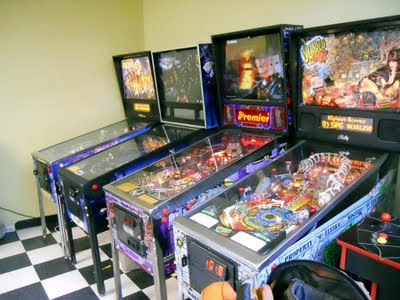 What a lineup!
Besides Batman, the other machines were in PERFECT working order.  I can't stress how clean, and how well these machines played!  It was like they were fresh from the box.  I had never played Monster Bash or Nightmare on Elm Street, both were a lot of fun, but Monster Bash was AMAZING!  What I loved most about these machine, though, is that they all share a theme!  It added a real touch of class that all the pinball machines had something in common.  Since there are so many machines are based on properties, it stands to reason that you could simply round up a number of similar themed properties within a genre and get the machines based on those properties!  It makes me think about what other cool pinball groups you could make...
Vacation:
Whitewater, Gilligan's Island, Fish Tale, No Good Gofers
Space:
Attack From Mars, Black Hole, Space Shuttle, Apollo 13
I could do this all day!  Anybody out there have any good pinball theme combos?
Posted by Jon Chad at 9:07 AM