In January, I went to visit my family in Seattle for a few days.  While in town, I swung by one of the great American pinhalls, Shorty's, with my dad.  To my delight, I found that they had a brand new Transformers set up in the back room. 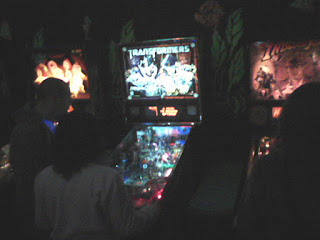 I must say, the game was a lot of fun.  I love the idea of splitting the playfield into two sections, and the ability to choose which way you want to play the game.  The first time I played, I set up a two player game and made player one an autobot and player two a decepticon, so I could compare and contrast.  The shots were super satisfying, the multiball was crazy and intense (BOOM BOOM BOOM BOOM out of Megatron!) and I loved the series of lights in the top lanes, outlanes and other various places on the playfield.  It was pretty mind-bending, when I figured out that there were TWO series, one for each side.  It was a cool twist on a simple idea.

Anyway, my father and I only had an hour to kill before we had to move on to our next appointment, so I didn't get too deep into the game.  But my first impression of Transformers was very good (it helped that I got a replay on that first autobot game :)  I can't wait to play it again the next time I see one!
Posted by Alec Longstreth at 10:00 AM