As Alec has been hinting over the past couple posts, I DO have some pretty rad pinball-related news.  A couple of weeks ago I bought myself a 1987 Premier Arena pinball machine.  I found it on craigslist for cheap and moved it right into my apartment.  My ultimate plan is to move it into the school's media room once Alec moves his Medieval Madness machine out, but for now, I get to play it every day and work on it.  Considering the price I paid, I thought that there was going to be major problems with the game, but lo and behold, the thing plays like a dream.  The only lingering malady is a malfunctioning alpha-numeric display.  Soooo, I can't see my score, unless I get a high score. I really don't care, for now, though.  I'll have to pony up for a new display before I move it into the school's media room.

The reason I was so drawn to this game was that it was so very different from Jurassic Park.  1) It doesn't have a wizard mode 2) It doesn't have modes 3) It has drop targets 4) it has lanes 5) it's alpha-numeric.  I've played it every day since I got it and I love it.  The artwork is absolutely hilarious, and there are some really great midi tunes that play (especially when you get the special!)

On the same order that Alec got his Medieval Madness cliffy protectors, I got a handful of parts (and the manual) for Arena.  The biggest coup was the general illumination, which was completely out.  All it took was one slo-blo fuse and WHAMMO, all the lights came on!  It was like pinball xmas! 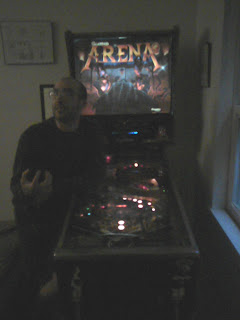 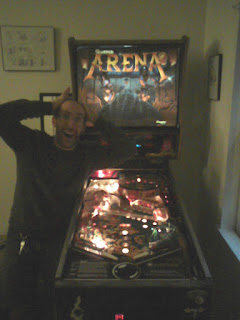 OOOOOOOOOOHHOOOOOO!!!!  ARENA!  I've got other big pinball plans in the works, but that's all you get for now!!
Posted by Jon Chad at 11:15 AM